In 1902, George A. Archer and John W. Daniels began a linseed crushing business.

By combining unmatched industry knowledge with an unwavering commitment to excellence, we’ve made the most of opportunities for 120 years, growing from a regional linseed oil business to a global leader in human and animal nutrition and the world’s premier agricultural origination and processing company. Read more about how it all began.

Over the past decade, we have transformed ADM, improving our company and aligning our portfolio to meet growing needs for food security, health and well-being and sustainability.. Today, we are an indispensable global agricultural supply chain manager and processor, a premier human and animal nutrition company, a trailblazer in groundbreaking solutions to support healthier living, a cutting-edge innovator in replacing petroleum-based products, and a leader in sustainability. 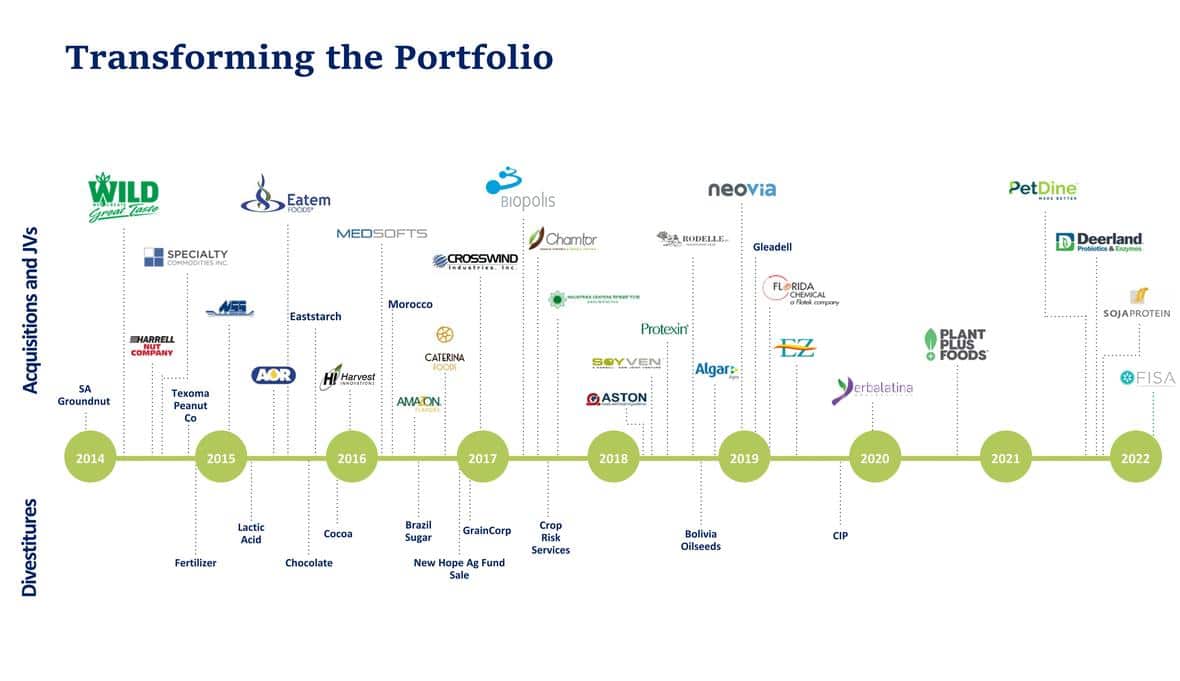 Read more for a detailed timeline of ADM's history.

These are Our Founders. This is Their Story.

Two ambitious people come together and, from humble beginnings in someone's garage or a makeshift office, create a company that grows and shapes a world they never could have imagined.

One is the bear, the other the bull. One acts as the extroverted face of the company, the other its introverted sage.

An Unlikely But Fortuitous Match

This odd-couple tale is one of the most familiar narratives in business. From Jobs and Wozniak at Apple to Procter and Gamble at P&G, corporate history is filled with stories of unlikely duos who—through their shared passion, innovation and perseverance—build a great and lasting success.

This also happens to be our story.

ADM's founders were an unlikely but fortuitous match. George Archer was a quiet man and a deliberate planner, widely respected for his comprehensive knowledge of the linseed oil industry. John Daniels was outgoing and brash, extremely popular in trade circles and a leader in industry associations. Their distinct personalities made for a formidable combination and, in many ways, created the DNA of the company we are today.

It was Archer (above left) who first sensed a new opportunity in the linseed oil marketplace at the start of the 20th century. When business took him west to Minnesota, he took note of the fertile soil, strong rail infrastructure and growing population in Minneapolis. There, he saw a promising alternative to the declining production of linseed in the east. So he wrote a letter to Daniels (above right), a friend from their years together in the industry, encouraging him to act on the opportunity.

And act he did.

In July 1902, ground was broken on the Daniels Linseed Co.'s first mill in Minneapolis. "Year around production with low margins" was the new company's creed, and a small but hard-working team produced linseed oil for industrial applications such as paints, sealants and adhesives.

Archer soon joined his friend and during the company's first decade, the two sat in facing roll-top desks in a small one-story office adjoining the original mill. The office was sweltering, full of noise from the plant's presses and redolent with the aroma of linseed oil.

Laying the Groundwork for Future Growth

Daniels' knack for building relationships helped lay the groundwork for future growth and expansion. Archer's careful supervision and keen eye for unnecessary costs helped the young company manage through lean times, which were many.

Expenses were monitored so closely that Daniels and Archer each carefully opened the morning mail so that the envelopes could provide the day's scratch paper. Rather than spend on office amenities, earnings were reinvested through stock dividends, plant improvements and growth projects that helped the company survive the 1903 depression and a subsequent downturn in 1907.

Despite having a limited portfolio and little cash on hand, their strategic utilization of resources helped the company turn an improbable profit of $30,212.80 during its first half year of operation and an additional $72,000 by the end of the first full fiscal year. By the company's tenth anniversary, it had tripled production capacity and increased capitalization almost eight times. And in the decade to come, the unique partnership between Archer and Daniels, based on a shared understanding that cost-consciousness and growth go hand in hand, carried the company into new markets and greater success.

Generation after generation, ADM colleagues have demonstrated this same understanding.

Unlocking Millions Through Resourcefulness and Expansion

From pinching pennies on office supplies in 1903 to unlocking millions in run-rate benefits through productivity initiatives today, our resourcefulness underlies our ability to act on growth opportunities as they arise. Where Archer saw potential in the Great Lakes as a shipping channel, more recently it's been the Paraná and Danube rivers. And where the fertile lands of Minnesota originally signaled new opportunity, today we're meeting growing consumer demand for food and beverage products that are natural, sustainable, and support good health.

By combining unmatched knowledge of our industry with an unwavering commitment to excellence, we've made the most of opportunities for 120 years and grown from a regional linseed oil business to a global leader, paving the way to a brighter, more sustainable future.

Forty-one thousand people. An impressive history... and a bright future.

Partner with us now!

For general inquires, questions or more information, please reach out to us. We are here to help.