Meet the Women Changing the Face of Operations at ADM Mainz

Meet the Women Changing the Face of Operations at ADM Mainz

Meet Nadine Götzmann, operator; Nadine Klein, loader; and Deepannita Sen, boiler house engineer, who are among the five women taking charge at ADM’s oilseeds crushing plant in Mainz, Germany. They operate production lines, load trucks, and oversee operations in the facility’s boiler house. They are the new face of manufacturing, a sector where women are traditionally underrepresented. We spoke to them about their careers and find out what it’s like to be a woman in manufacturing today. 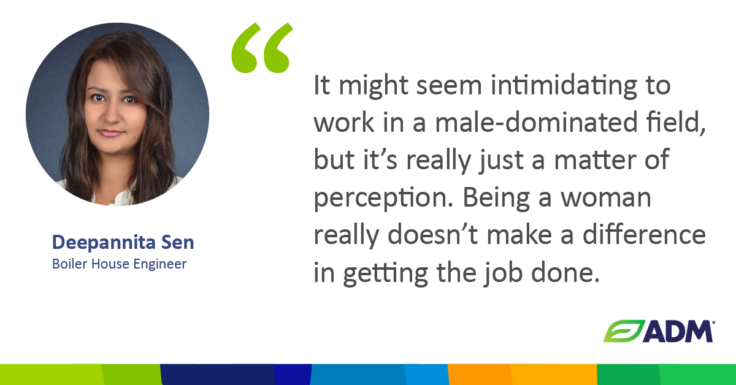 Tell us a bit about your journey at ADM.

Nadine Götzmann: I started my career with ADM as an intern at ADM’s oilseed processing facility in Hamburg. When I completed my internship, I got a job opportunity as an operator at ADM’s facility in Mainz, where I have been working for two and a half years now. I was looking for a career in the chemical field and my internship gave me the opportunity to pursue my interest.

Nadine Klein: I used to be a baker but changed career paths to start working as a loader at ADM in August this year. I am the only woman in my team of loaders at the facility, and my job involves loading trucks with soybean meal and oil, as well as unloading barges with soybeans.

Deepannita Sen: My career with ADM began in 2011. I was selected for a training program in Hamburg for a year, after which I was posted at the Dharward oilseeds processing plant in India.

I was the first female engineer across ADM India’s facilities and started working in the boiler house as a production engineer. I was soon promoted to boiler house manager and had an opportunity to join the power station competence center at ADM Hamburg. I spent the first two months in the Mainz facility because they needed support for their annual shut down. Afterwards, I was offered the opportunity to continue working in Mainz.

Have you ever faced any challenges working in a male-dominated field?

Nadine Götzmann: I was the first female operator in the Mainz facility, so in the very beginning when I started, some colleagues might have been wondering what I was doing there. But I never had any problems because of my gender.

Nadine Klein: No, I never faced any issues. I was well-received by my colleagues and they have been really nice and helpful.

Deepannita Sen: I was always well-accepted by everyone I worked with, both in India and Germany. It might seem intimidating to work in a male-dominated field, but it’s really just a matter of perception. Being a women really doesn’t make a difference in getting the job done.

What advice would you give to women who are considering jobs in your field?

Nadine Götzmann: It’s important to have enthusiasm and a positive attitude to be able to successfully work in a production facility, where the environment can be rough at times.

Nadine Klein: The job can definitely be done by a woman! You might get dirty sometimes while loading trucks, but women can do it!

Deepannita Sen: People might have their own ways of working, with differences in communication styles and how we approach our roles. Women shouldn’t be worried about their own unique ways of working and instead, I would advise them to become comfortable with themselves and develop their strengths.